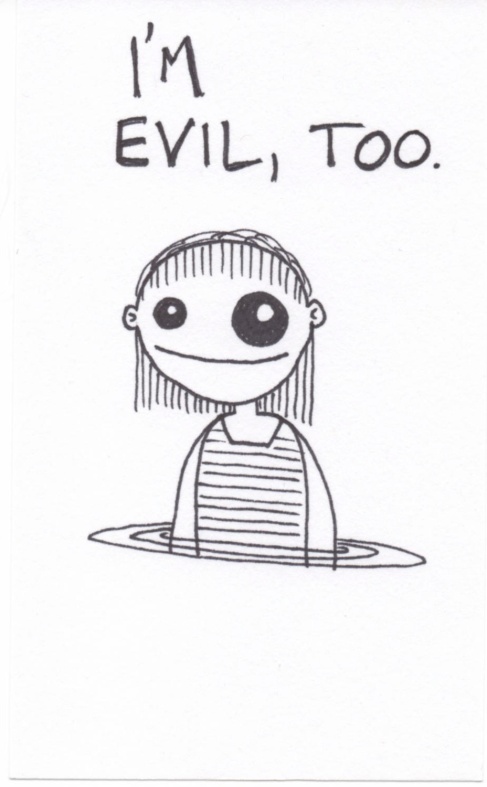 This has been a busy week!

Well, they’re all busy, aren’t they? I’ve never liked using “being busy” as an excuse for falling behind in something, but that doesn’t stop me from doing so.

Still, it has been a busy week.

At this point, I’m just waiting for the week to end, as we’ve got a marathon of holiday activities planned for the weekend, including attending a holiday parade, a craft fair, a ballet, and a live performance of Mary Poppins, for which we’re skipping a potluck.

So it’s going to be a busy weekend, too.

I beg your pardon for not going too introspective or “themey” with today’s post. As happened with my spider/Internet post from yesterday, today’s image and the text weren’t planned to marry together—but unlike yesterday’s post, I’m not having a last-minute realization of a connection, no matter how slim or subtle.

My doodle today came from a conversation I had with my firstborn, when she was about 4 years old. I walked in to hear her declare to me: “Mom’s evil.”

I didn’t know quite how to respond to this one. While I fumbled for the best way to continue this conversation, she added: “So, we’re the stepsisters. You can be the prince.”

Aha. Cinderella. This shows why it’s generally a good idea to wait after a kid says something startling, as opposed to knee-jerk reacting with something crafted from an adult’s logical and often cynical/world-weary frame of mind.

On a side note, I’ve traditionally heard those stepsisters described as “ugly”—which may not be fair, but it is tradition—but I suppose “evil” applies, too.

My girls have showed an increased interest in classic fairy tales lately, which delights me. My 4-year-old specifically requested “The Three Little Pigs” and “Little Red Riding Hood” for bedtime stories last night, and I’m so glad. These stories are some of the foundational building blocks for, well, storytelling, which is a subject very near and dear to my heart.

I’m a professional journalist, pretty much because it’s one of the best way to frequently and regularly get stories out to the masses. It’s why I fell in love with this line from The Grapes of Wrath by John Steinbeck: “The story tellers, gathering attention into their tales, spoke in great rhythms, spoke in great words because the tales were great, and the listeners became great through them.”

I could just sigh at that line all day.

What are some of your favorite stories? Or—to get meta on you—your favorite thoughts/words/quotes/ideas/stories about stories?