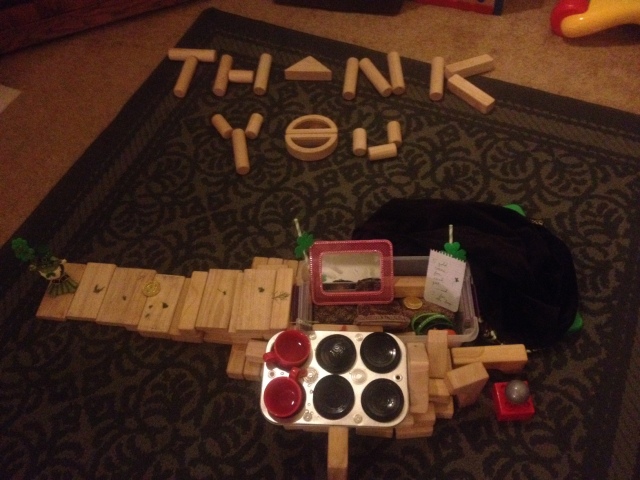 This is what the leprechauns thought of the trap the girls set. The food was mostly eaten, the teacup bathwater was sloshed around, bits of greenery were strewn about, and chocolate coins were tucked in various nooks around the room, along with a note that read, “5 gold coins for each girl and 2 for the boy.”

I have a lot of fun with this each year, which is weird, because I don’t like the Elf on the Shelf. At all. But this seems similar somehow.

What do you think? Are St. Patrick’s Day leprechaun traps cute and imaginative? Or taking yet another holiday too far? 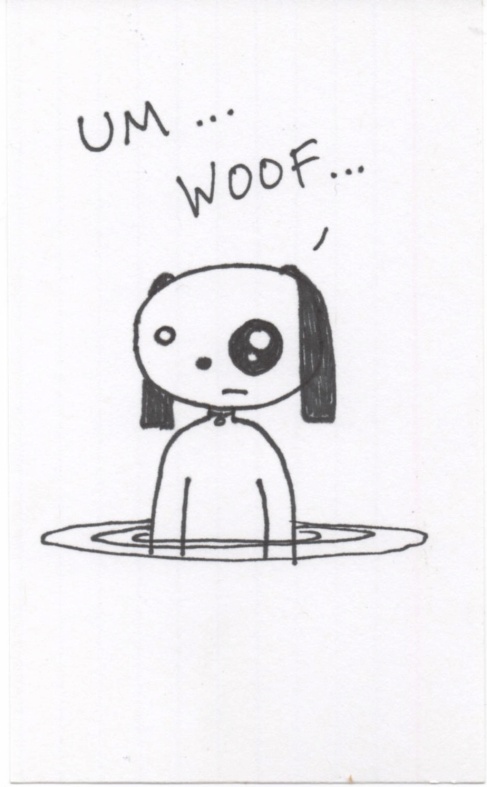 This happens a lot:

I’ll be telling some anecdote or other about my kids, and no matter the subject—whether I’m talking about a funny thing they did or complaining about how they keep me awake at night—a listener will follow up with a similar story. But about a pet.

I get it. I really do. There are plenty of similarities between my kids and your pet. They both eat off of the floor. They’re both so cute. They both bite. They both have accidents that jeopardize the return of a full security deposit. They both get sick at inopportune times and in inopportune places, like the bed at 2 a.m. Or the laundry basket right before work. They both look up eagerly when you say something that isn’t their name, but do it with the same inflection as if you were saying their name. Classic.

I generally don’t mind the comparison. Why should I? Families come in all shapes and sizes, and not all those sizes and shapes are human. When listing the members of her family for a school project yesterday morning, my 6-year-old wrote her sister’s name, followed by “little brother” and then “sea monkeys.” (I cleaned up the spelling for her here.)

Pets are awesome. I wish I lived somewhere I could have a dog, at least.

Pets and kids present their own respective joys and challenges. That’s why today I’m thankful for families of all kinds. Some people’s pets are their kids. They’re expensive. They’re worrisome. They’re affectionate and amazing. And they make me a little jealous, because such families don’t panic when they realize that they haven’t started a college savings plan yet.

And even though pets and kids are different, that doesn’t mean I don’t want to hear about your animal, or that I think less of you if you have cats instead of children. Not at all. When I talk about how my fussy baby kept my wife and I up for 36 hours straight, and then I’m not super sympathetic when you tell me, “Oh, I know exactly how you feel! My cat wouldn’t stop meowing last night!”—when I, in fact, roll my eyes—it’s because I’m cranky and sleep deprived. Also because it’s not exactly the same. Cats can catch and eat bugs if you don’t feed them right away—though I guess kids can, too. Look, just give me this one.

A particular co-worker of mine and I discuss this topic at length, frequently, mostly because I talk about elementary-schooler and toddler issues and she counters with feline and canine ones.

Just a few days ago, I had shared some antic of my son’s, after which my co-worker immediately related a tale about her greyhound. Then she laughed and—perhaps anticipating a remark from me—said, “No, I’m not comparing my dog to your animal.”

I’m thankful for a lot of things, but I thought I’d share some of the stuff I’m sort of back-handedly thankful for this week. Maybe there will be some genuine sentiment the closer we get to Thanksgiving. For now, however, I’m thankful that I function during the day despite having a night of sleep that looks like this:

I radiate warmth, so I think my kids are drawn to me as a sort of hairy space heater. My wife sucks heat out of living beings to compensate for her constant chill (her feet never get warm!), plus she doesn’t tolerate children in her immediate sleeping space—apart from the baby. Usually. She’ll kick them out, so they’ve learned to come straight to me.

I’ll try, half-heartedly, to keep them out of our bed. If I’m awake enough, I’ll get up to shepherd one or the other girl back into their room as soon as I hear the telltale squeak of their door handle turning. I’ve thought about WD-40’ing it, but I’ve decided I like the warning it gives.

Sometimes my interception works and I can 180 the kid back into the room with the nightlight and the other nightlight and the white noise machine set to “ocean,” but more often than not, my daughter—whichever one is awake and wanting to be with me—will start getting upset. This can lead to a startled-awake baby and tears all around, so I relent pretty easily. Plus, I’m frequently more than half asleep, stumbling around, making sure I’ve got at least boxers on, so I’m not totally sure what I’m doing or agreeing to anyway. 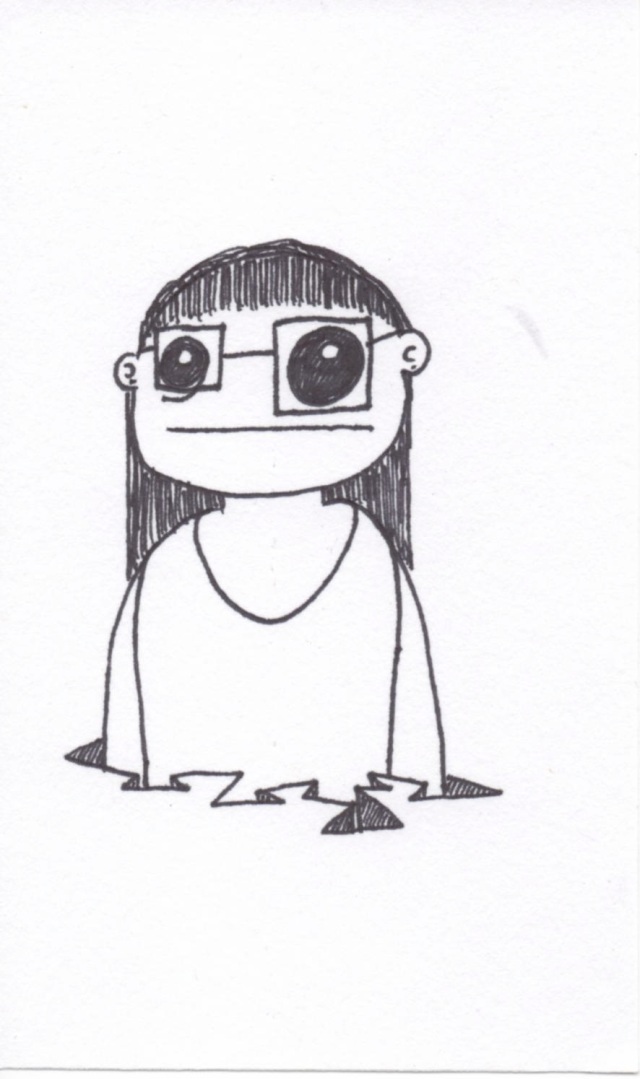 Recently in a dad-blogging forum—because I frequent such places now—somebody posted a link to this babble.com article, “Why I Don’t Put My Husband Before Our Children,” which is about, well, exactly what the title says.

Someone else contrasted that essay with this one from the New York Times, “Truly, Madly, Guiltily,” which presents the opposite perspective.

In case you’re too engrossed in my own writing (or lazy) to follow the links, here’s a summary: In the first piece, a mom discusses the challenges of dealing with three children and the tolls that takes on a marriage—and why she’s OK with that, for now. In the second piece—written years ago, actually—a mother explores the idea that her children are orbiting moons, while her husband is the sun. (She also explores that topic though a lens of sexual attraction, so hey!)

Intrigued by the two views, but leaning very heavily toward the second (given the two choices; there’s no angle here on children vs. no children or single vs. married), I was interested in hearing what my wife thought. So I sent her the links.

She responded pretty quickly, sending me what I now give to you as the first guest post in the Shallows (almost guest post, because I’ve still written a fair bit).

On the first essay: “That mom is going to wake up one day to the realization that the ‘hard’ part of parenting doesn’t end after the children are toddlers. One day she will realize she has no idea who the man is in the bed next to her. Children are needy and exhausting little humans. They will always demand all of you. You make choices about your priorities and how you manage those demands. I think her attitude leads to the kind of marriage that ‘stays together for the kids’ and ends as soon as the kids are out of the house because she and her husband made the choice to not make each other their priority.”

Wow! Maybe I should turn this blog over to her more often.

She continued: “The second one I tend to agree more with (obviously). As I have said before—I married you because I chose you. Our children are needy, exhausting blessings—but you (and being united with you in our parenting) always comes first. You can’t be united if you don’t make each other a priority (or don’t even spend time together). That time does not necessarily have to be romantic weekends away like she says (though that sounds wonderful); it does have to be a regular commitment to communication and connection. Children learn from what is modeled for them—I would hope that we model a love that is committed, playful, supportive, and passionate. I also think sex is a reflection of the intimacy and emotional connection that is in a marriage. I’m glad she talked about enjoying her sex life (though I personally would have been more bold in challenging the play group moms and their negative attitudes)! I actually have had the same thoughts she has about how I would react if our children died versus if you died.”

I’ve been thinking of starting a place in the Shallows for the bigger-issue serious stuff, called the Deep End, and this post would certainly land there.

What do you think?

(P.S. This is an old drawing of Sarah, from back when she had rectangle-framed glasses. Also, as you can see, the straight lines of her eyewear influenced the hole out of which she’s sticking.)