Firstborn (eating ice cream): Where does the word “dessert” come from?

Me: You know, that’s a really good question! I think—

Firstborn: Where does the word “grave” come from?

My family gets a farm box delivered each week, part of what’s called a “CSA” program, for “Community Supported Agriculture.” Basically, we pay for a share of what local farms produce, and the literal fruits (and vegetables) are delivered to our door.

This week, we received a lot of bok choy, which prompted my 6-year-old to collect it all and array it on a chair in our living room, giving each piece a Laura Ingalls Wilder-esque name.

Then she added: “So, which ones should we chop up first?”

My wife commented that the whole scenario sounded like a “Little House on the Prairie”/axe murderer mashup, but my daughter did subsequently singlehandedly prep and cook ginger rice noodle soup for the family for dinner tonight, so I’m not worried.

At least, I’m not complaining. 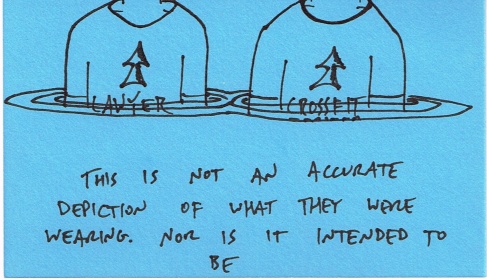 When I was in high school, my family—along with four others—began an annual summer camping trip that still continues to this day. We head to the mountains to spend five or so days hiking around, building log rafts on the lake, playing disc golf on a course we made up, taking day trips to waterfalls, reading, playing board games, and the like. Or at least we used to. Since most of us kids are now in our 30s, and many of us have families of our own, we’ve slowed down a bit. Hammocks feature predominantly in the activity line-up.

Those five families also get together in the week after Christmas to have dinner each year. My wife, children, and I historically aren’t able to attend the post-holiday meal due to my work schedule, but as I took a week of vacation this year, we were able to make it. Other friends, who now live in other cities and on other continents, weren’t able to come, but I still got to see many of my favorite faces.

Two of my friends, in particular, hounded me with requests to appear on my blog. They waved their arms around and everything. I think they were attempting to do something funny. Something blog-worthy. So forget that I took my three children to see snow for the first time in their lives today. (Actually, don’t forget that. I plan to post about it later.)

I’ve been friends with both of these guys since I was in junior high, and they’re both very tall. One is now a lawyer, and one is a Crossfit coach. One of them I frequently refer to as the funniest person I know, which is really saying something.

We were at one of those all-you-can-eat salad-bar buffet places, and he left half of an avocado on his plate when he went to get seconds—adding a request to not let any passing servers take the avocado along with his messy tray. Not five seconds went by after he left when a server came to our table to ask if he could remove anything. I handed him the entire tray, avocado half and all. But I had a change of heart and rescued the coveted food item before it was gone for good. Then I hid it on my lap.

My friend is the type to appreciate the joke, but he’s also the type to sort of wish I had really gone all the way through with it: to have actually let the waiter clear away the avocado. My friend prefers a good punchline to getting what he wants.

He also “accidentally” spilled some chicken pozole soup down my back when he was walking back to the table and noticing that his precious avocado half was gone.

Anyway, he’s really tall. So is my other friend, which is why I granted their request for a blog appearance tonight. And it’s late.