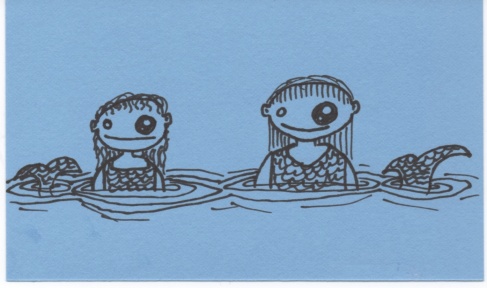 My girls love going to the spa/pool at the center of our condo complex. A trip there can be a bit difficult, since the 6-year-old wants to spend her time in the cold water, while the 4-year-old wants to stay in the warm water. I have to act as a sort of mediator, saying, “Well, now, it’s not that frigid over here” and “Sweating is good for you! If you’re too hot, just sit on the edge there for a while.”

What the girls do agree on, however, is that they’re mermaids. They love to play the Mermaid Game, which can range from the two of them being mermaids that I’m trying to catch—either to eat or to put into an aquarium or mer-jail—to the three of us being mer-folk in search of treasure.

I have a lot of fun seeing where their imaginations take us, but I do often end up mediating once again.

My firstborn once declared that our mer-journeys would take us to “the Depths of Dismay—the Depths of Spain.” That meant the pool. We jumped in there, then found ourselves pulled back to the spa by my secondborn.

The girls were actually very good about pushing for their respective path through the game. Nobody got angry or rude. Still, it was a bit like a war of imaginations. My firstborn likes to set up elaborate scenarios that will take us to, say, every filter in the spa and pool. My secondborn tends to solve such pretend dilemmas very easily.

“It says there are four treasures.”

“No, it says that those are not the real treasures. The real ones are in the deepest—”

“My octopus got them!”

I can usually get the girls to take turns leading the story, which typically turns into a cold vs. hot adventure, with me bearing the brunt of the constant temperature shifts. Still, the sunken chests packed with gold, pearls, and various gems and jewels make it worth it—as do my girls’ pruney fingers and satisfied smiles when we finally step onto dry land, towel off, magically grow legs, and head home. 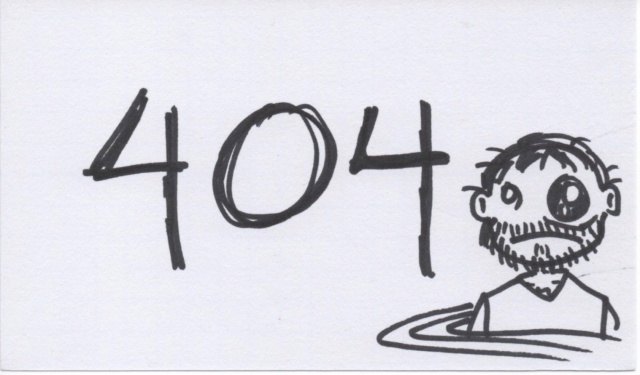 If you can read this, it means I’m still alive somewhere.

No, I’m not holed up while defending my family from the zombie apocalypse. I’ve been trying to make some technical tweaks to my blog—changing the address to a simple standingintheshallows.com, for one—and for a while, nothing seemed to be working.

I was worried because I couldn’t see the Shallows anymore, and I imagine you couldn’t either.

But as I could still get into the admin side of things, I could still write posts. And I knew that said posts would go out to more than 700 readers who’ve subscribed via e-mail (and who now know that I’m not exactly on track to be the next Steve Jobs due to my online fumbling). So I started writing this digital message in a virtual bottle.

Some of the technical jargon I read noted that it can take up to 24 hours for domain name changes to take effect, but the “page not working” message I repeatedly saw had the word “never” in it—as in “don’t wait around for this to start working, because you broke it and it’s never going to get back together again.”

I turned to some fellow dad bloggers for help—thanks Adam Cohen from DaDa Rocks!—and they talked me through the mini-crisis I was having, assuring me that it all looked fine on their end.

I’d like to say that I was sure all along that I didn’t do anything irreversible, but you know how I worry. Not even all the king’s horses and all the king’s men could help with Humpty Dumpty, and they had to have been pretty well trained, right?

On the plus side, I spent the evening worrying about web stuff as opposed to my kids’ health—though I didn’t like the sort of raspy sound of my son’s cry when he woke up a little while ago. Ah, well. The night is young.

I recently got a new phone—a phone that can actually do stuff, and one that prompted my wife to say, “Welcome to the 20th Century.”

This is my first-ever personal phone, and I sort of didn’t know what to do with it at first. An office Secret Santa, however, had given me an iTunes gift card, so I bought a couple of songs and then remembered an app I’d read about last year.

It’s called Zombies, Run!, and it basically plays a story for you to listen to while you run in real life. It’s sort of a game in that you “pick up” items as you go along—including medical supplies, water, and, honestly, underwear—some of which you can then use to improve a virtual outpost full of post-zombie-apocalypse survivors, but the main draw is this: While you’re running, earbuds firmly in place, a voice gives you directions and reports on nearby groups of “zoms” with a hankering for your hamstrings.

I initially thought that the game was a bit more interactive, but the missions seem to be set audio tracks. Which is fine by me. My typical physical activity consists of walking up the stairs to go to bed, and this download actually motivated me to get out of the house and do several laps around our condo complex.

I was prepared to be a bit freaked out, but the initial mission was fairly tame. At first. I chose to run at night, thinking the darkness might heighten the suspense. Also, that’s the only free time I can generally carve out of my day.

Once I got into the groove—both in running and in the game—it was easier to slip into the story. I tuned out my neighbors, waving from their garages as I jogged past, and focused on the narrative. Smoke coming from one condo’s chimney became the sight and smell of a downed helicopter. I didn’t know how to incorporate the one set of Christmas lights still mounted and lit, though.

Everything was going smoothly until a large pack of zombies caught wind of me and gave chase. One zombie in particular broke from the pack and zeroed in on me.

The voices in my ears grew urgent. “Don’t look behind you!” they shouted, “Just run! RUN!”

That worked. I resisted the urge to glance backward, even when I passed a streetlamp with dual lights on top, giving me a double shadow. Suddenly, as my eyes slid sideways, I could see silhouetted on the road another figure immediately behind me.

Imagination is a powerful thing, especially when it has audio help.

Since this is the first time I’ve run in, well, my 30s, I will admit that I paused the track to walk a bit before carrying on the run for my life. I imagine that the zombie took a breather, too, maybe put her decaying arms up over her head and shuffled along a little more slowly before picking up the pace again.

I’m a bit sore now from the rush, but I will be going out again soon.