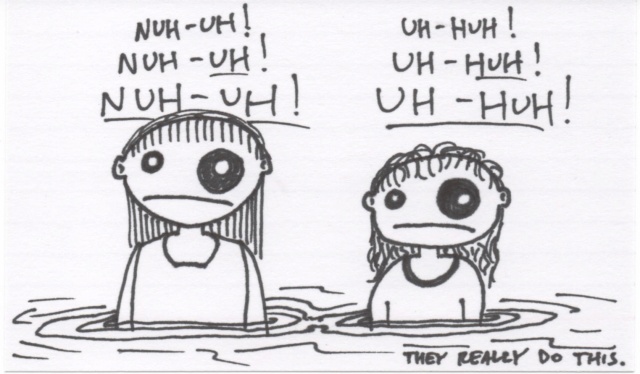 I’m an only child.

Ah, some of you are saying. That explains it.

Oh, come on. The only thing it explains is my complete surprise at how siblings interact day to day.

When I was little, my parents periodically checked on me to see if I was doing OK with being what the French call un fils unique. But they didn’t want to be direct for some reason—maybe they were worried they’d bias me toward wanting a little brother or sister based on their word choice—so they came in at an angle, asking me how many kids I wanted to have when I grew up. My unfailing answer: 13.

Repeat every half a year or so. Even as a little kid, I was messing with their heads.

But I did enjoy being an only child. I could do what I wanted when I wanted—within reason, of course—and I never had to share my toys or take turns or anything. Two of my lifetime best friends—brothers who lived on my street—were literally seconds away from my house, and I could play with them at a moment’s notice, then leave or watch them go home when I felt like it. They were like brothers I could shut off when I was ready to be an only child again.

Now with three kids of my own—two of whom seem to have looked up “sister behavior” in the Really Big Book of Familial Cliches—I’m routinely dumbfounded by the way my children act toward each other.

My girls—one 6, one 4—go from cuddling to screeching in less time than it takes to say, “Who wants hot cocoa?” They both want the same mug. They want to race to the kitchen. They make up the rules as they’re running from the couch where they had just been reading while snuggled in a blanket—rules that give the rule-maker an advantage and declare what the winner gets to do, how much cocoa she gets, which prizes she’ll receive, how she’ll get to help me pour the milk or scoop the chocolate. They push and grab at each other in an effort to win their made-up contest. And then someone gets hurt. And then someone cries. And then someone shouts.

And then one gets the other an icepack from the freezer and delivers a mumbled apology. Or starts freaking out more. It depends on the day.

They freely share clothes and compliment each other on their fashion sense, except when they’re angrily accusing each other of stealing outfits. The older one frequently goes out of her way to say how bad the younger one looks in certain ensembles. I thought this sort of dialog only happened in sitcoms to convey family strife that can be overcome with a few words of wisdom after 23 minutes of hilarious tension.

They bicker over who gets to wash their hands first, and then they either patiently take turns or a fight breaks out. They each complain that the other isn’t doing any work when they’re cleaning their room; such complaints are often delivered listlessly from the floor. Glasses of juice and milk have to be exactly even, as do slices of cake, bowls of soup, and rounds of Plants vs. Zombies played on the iPad.

I have never before met two people who seem to love and anger each other so thoroughly. The little one tattles, which is behavior we’re discouraging, although the habit does alert us to the older one’s often ill-thought-out and dangerous antics. We make allowances for tattling if the tattler makes the house a safer place via the tattling, but that’s a fine line to walk with a 4-year-old, who still sort of equates tattling with lying, and so maintains she’s not tattling when she says her sister stuck her tongue out at her. “But it’s true!” she insists when we tell her to deal with it herself.

The older one can be quite mean to her little sister, but her little sister often relentlessly copies her—another behavior I thought had been made up by uncreative TV writers—and goes out of her way to push the exact buttons to get a big reaction. These are the sorts of buttons only someone who knows you intimately can push.

I don’t think I will ever truly understand what it’s like to be stuck with someone who shares your parents with you. All I can do is stand back and watch. And referee. And call my wife in to look when I peek in their room at night to see the girls sharing a bed, holding hands in their sleep.

Did you fight with your siblings? Or are you lucky like me? (Or did you wish you had a dozen brothers and sisters?)