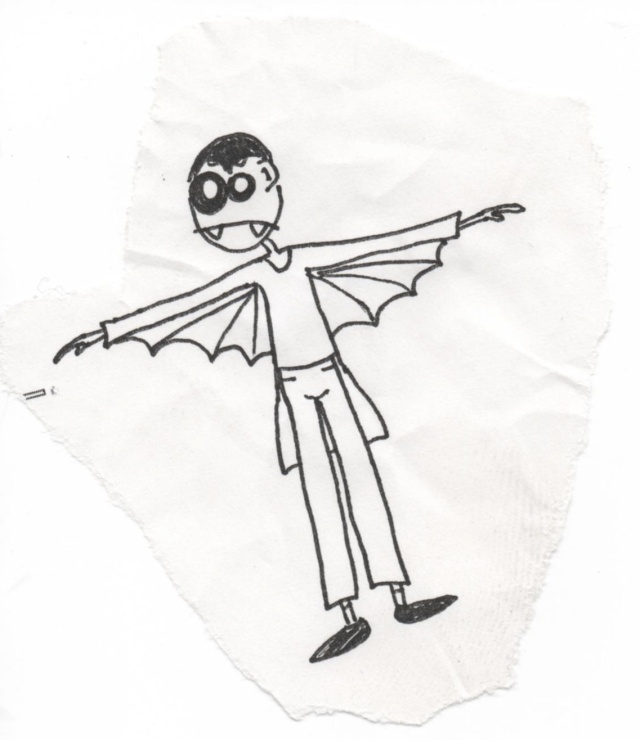 (Shallow Note: This vampire is from a series of monsters I drew in 2002, back when I was still trying to draw hands. These turned out OK, I guess.)

We get a lot of mosquitoes in our house for some reason.

Fortunately, West Nile Virus has dropped significantly down on my worry list. It’s not like I’m unconcerned about it, and it’s not like there aren’t any birds around—because just a couple of weeks ago a hawk sat on a fence that runs along our front walk and methodically devoured a dove, much to the delight of my daughters, who later went out and retrieved a grimy chip of bone, probably from a skull.

My germaphobia kicked in there for a minute, but I quickly cooled back down. Lots of handwashing—theirs, then mine, since they handed it to me—helped.

I know West Nile Virus can be bad, but that’s what I’ve been working on lately: the “can be.” Because “can be” is not “will be,” which is a mental translation I tend to make.

Make my typical mental translation for yourself (also change “at risk for” to “getting”) in that preceding paragraph and you’ll get a sense of how I live. Or at least how I’ve lived, because as I’ve said before, I’m working on it. And I think I’m doing a pretty good job.

It also helps that I did some research about West Nile Virus, and I learned that it’s not the biological terror our media—and I say that as a member myself—have made it out to be. I mean, I still don’t want any of my kids to get it, but I bet they’d ultimately be fine if they did.

I’m slowly learning the difference between healthy caution and worrying. But I’m reminding my girls to keep doors and screens closed anyway, because I still don’t want us to get mosquito bites. West Nile or not, they itch.