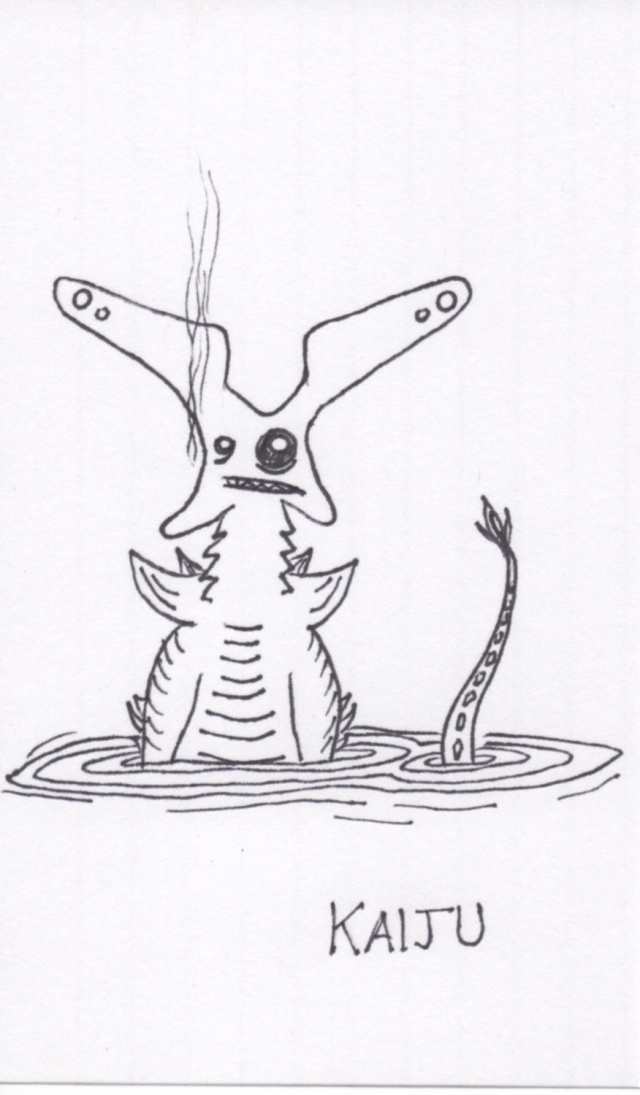 In addition to my anniversary—the highlight of my recent memory—I’d been looking forward for quite some time to watching Pacific Rim this week. I missed my chance to see it in theaters over the summer, so when I saw that it was coming out on DVD on Oct. 15, I pegged it as something with which to mark the end of a busy batch of days. It features giant mechanical warriors pummeling equally giant—like, Godzilla-sized—monsters (kaiju, to you), and there doesn’t need to be any more explanation than that.

I tend to do organize my busy life that way. I pick some upcoming event on an upcoming day and set my sights on it, thinking to myself, “Just make it to then, and you’ll be fine.” It’s a good way to not get bogged down by daily stresses and sadnesses, of which there are an Artax-sinking plenty, but the method also has some major flaws.

First, it keeps me from the present. I won’t necessarily be fully here if my mind is camping out there.

Second, it’s not a real ending. I get to my Friday (or whenever) finish line, only to find that it’s actually just a checkpoint. I know the race isn’t over, but I still act like it will be.

Third, it’s easily derailed. If I’m burning all my energy and focus with the expectation of a reprieve, and then something happens to delay or cancel it, I’m stuck with a stressed-out self who put all his eggs in one basket and then balanced that basket on the edge of a wobbly table.

Still, I have to admit it’s how I operate, for good or for ill. And despite the method’s flaws, it has its payoffs.

In addition to my regular family and work responsibilities this past week (and, yes, the amazing anniversary on Wednesday, which was a recharging checkpoint all its own), I had a long evening meeting on Thursday and a big freelance deadline on Friday. Plus I recently tasked myself with creating art and text for daily blog posts (if you hadn’t noticed), which has kept me busy.

Around Wednesday, my middle kid suggested a game-centered family night for Friday, and since my wife got me the cooperative Forbidden Island for our anniversary (despite that fact that she likes games like I like jazz: It’s fine in small doses, but not generally my thing, and the longer it is and the more thinking’s required, the more its appeal drops), we had the makings of a solid end to the week. Anticipation mounted.

When Friday finally rolled around, I met my deadline. My wife said she’d make risotto for dinner. Then she picked up the last available Blu-Ray copy of Pacific Rim at our local rental place.

That’s when I started to get antsy. I came out of a work meeting to see I had a voicemail from “Wife”—as she’s literally labeled in my phone—and my first thoughts were not so much concern about whether one of my children was injured, as is often my fear when my cell rings, but that someone was sick or majorly misbehaving and the perfect Friday I had been imagining/longing for/counting on was evaporating.

Changed plans are a staple of parenthood.

But even the fact of plans changing isn’t 100 percent guaranteed.

And that’s reality. Not everything is meltdowns and car troubles, emergencies and Band-Aids and throw-up buckets. Those things will come, yes—and I’m still waiting for another shoe to drop, even as I write this, since my middle kid complained about an upset stomach as she went to bed—but there are also nights when the children don’t bicker; the risotto is cooked perfectly; the family works together to win the game; teeth-brushing and pajama-putting-on and storytime go smoothly, the baby stays asleep; and a huge robot rocket-punches an extra-dimensional lizard right in its face.